As the weather warms, these fresh spring rolls make a perfect appetizer or light main dish.

Fresh spring rolls are made with a thin rice paper wrapper and a combination of thinly sliced vegetables, proteins, noodles, and herbs. The hardest part about making them is seeing the wrapper once you wet it. They are very thin and almost transparent when wet. And chopping-these do involve a lot of vegetable chopping.

To make the rolls:

Fill a large shallow bowl (or plate with a rimmed edge) with warm water. Dip one piece of rice paper into the water, just until the wrapper begins to soften (about 15 seconds); make sure to wet entire piece. Lay the wrapper on a separate plate, textured side up, with a small edge hanging off of the plate (this will make it easier to start rolling). Don’t wet more than one wrapper at a time; they will quickly stick together.

Place a combination of desired vegetables, protein/noodles, and herbs on the bottom part of the rice paper. Fold the bottom edge of the rice paper over the filling and roll tightly once or twice. Fold in the two sides and then continue rolling completely.

Fresh spring rolls should be served the same day as making then. If you do need to store leftovers, store rolls (not touching) in a single layer; the rice paper gets sticky as it starts to dry and they will stick together if stored in layers. 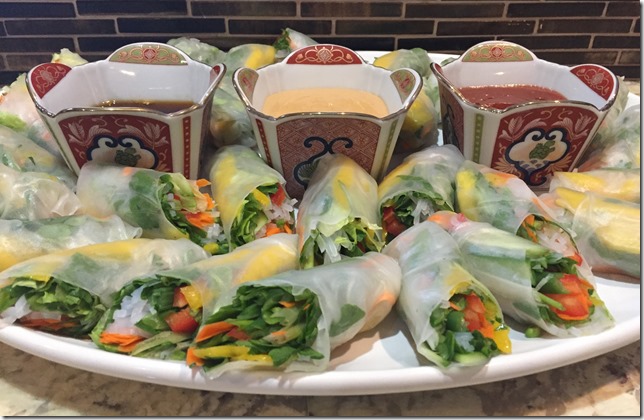 Below are ideas for vegetable, protein, noodle, and herb  fillings that can be used, and recipes for various dipping sauces. Pictured above are Spicy Sesame, Creamy Peanut, and Sweet Chili Hoisin Dipping Sauces.

END_OF_DOCUMENT_TOKEN_TO_BE_REPLACED 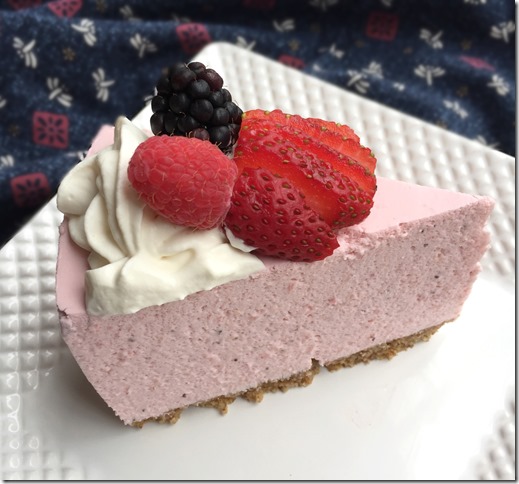 This sugar-free strawberry cheesecake may have just jumped onto my list of all-time favorite desserts, even those full of sugar.

This is a no-bake cheesecake that is easy to put together. Made with fresh strawberries, it is a fabulous summer dessert that won’t heat up the kitchen.

It is light and airy, not dense like a baked cheesecake. I sweetened it with stevia and erythritol, but you can easily substitute real sugar. But for those watching their carb and sugar intake, this is a wonderfully satisfying dessert. My kids don’t even miss the sugar!

I made it in a 9” springform pan, and it completely filled the pan for a nice tall cheesecake. You could make it in a little bit larger pan instead if you don’t want quite as thick of slices.

I garnished the cheesecake with some whipped cream and fresh berries. A wonderful light and summery dessert. 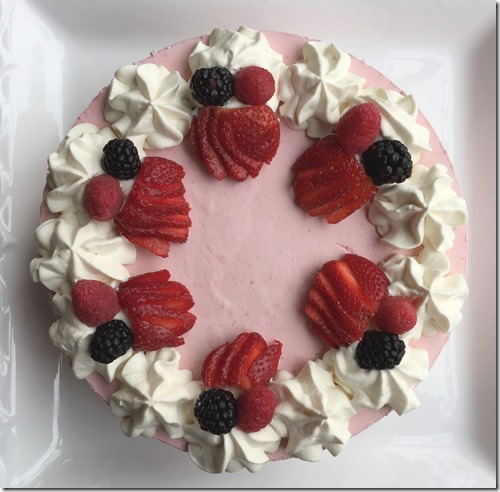 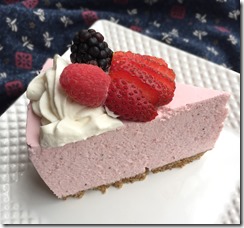 Place almonds, pecans, and oats in a food processor; blend until finely ground. Add butter and stevia  and pulse until combined. Lightly spray 9” springform pan with baking spray (I like coconut oil spray for this). Press crust mixture onto bottom of pan. Bake for 10 minutes. Cool completely.

Pour mixture over cooled crust in the springform pan. Refrigerate for at least 4-6 hours or until firm.

Garnish:
Combine cream, cream cheese, vanilla, and stevia in a mixing bowl and beat until stiff peaks form. Pipe onto top of chilled cheesecake and garnish with fresh berries. 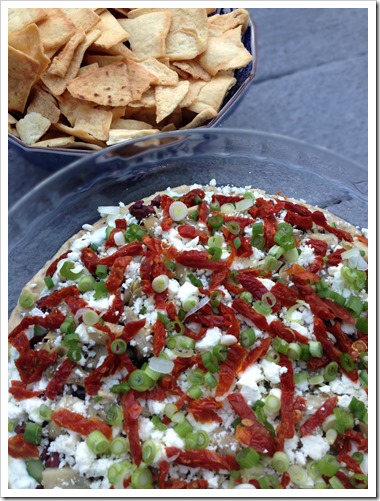 Seven Layer Dip gets a fresh summertime make-over. Or make it with eight layers (pictured above) if you want to really get fancy.

This is a great way to dress up plain hummus. Similar to the traditional Mexican 7-Layer Dip, but lighter and with fresher ingredients. With the huge variety of hummus available these days, you can adapt this recipe to suit your taste. My favorite hummus (after homemade) is the Supremely Spicy Hummus: it has a real kick! 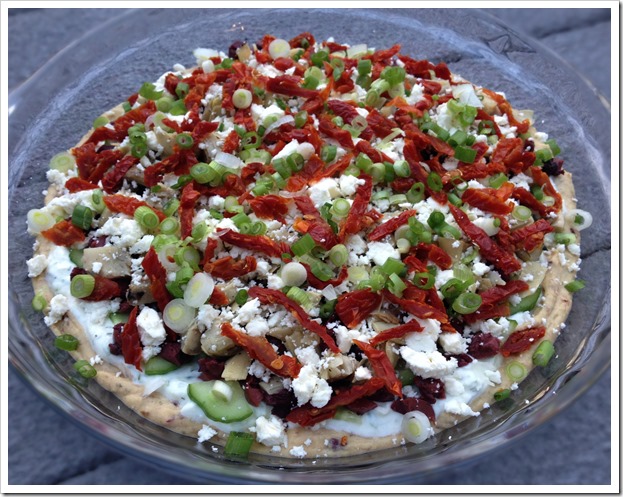 Start with layers of hummus and tzatziki, and then add whatever fresh ingredients you are in the mood for. I usually include most or all of the following layers: 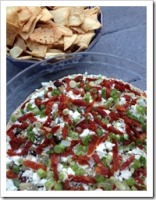 In a glass pie plate, tart dish or bowl, layer the following: 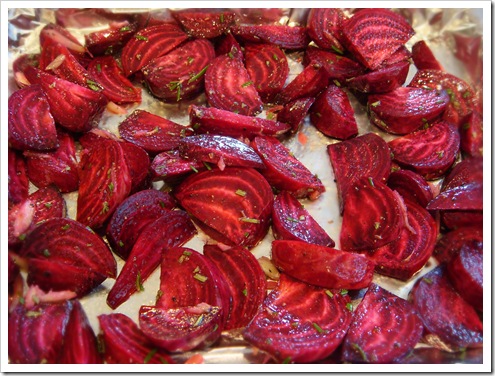 Beets are a controversial vegetable in our house. Until recently we were split pretty evenly between beet lovers and beet haters. This recipe, however, has made some converts to the beet-loving camp. There are still 2 hold-outs, but that may be due more to stubbornness than actual taste preferences. One child hardly put enough in her mouth to actually taste it before declaring it gross.

Beets are one vegetable that grew really well in my garden this year. I had to fight the deer for the beet greens, but even without their tops, the beets grew undisturbed by the menagerie of wildlife in my backyard these days. I love how prominent the stripes are in the raw beets!

Roasted fresh beets are a whole different animal than those sweet canned things. Add some garlic and rosemary and I think they are divine.

The cooked beets, unfortunately, don’t look as brilliantly beautiful as the raw ones, but they sure taste great! 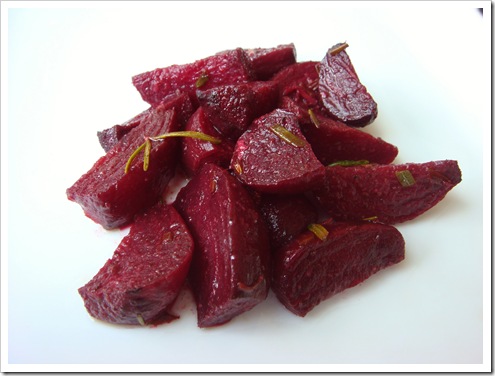 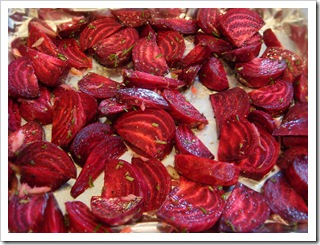 Cut beets into wedges (each beet should make 8 wedges). In a large bowl, stir together beet wedges, minced rosemary, sliced garlic and olive oil. Grind in some fresh salt and pepper and toss to coat.

Place in a shallow baking dish and cover with foil. Bake in preheated oven for 30 minutes. Uncover and bake for another 15-20 minutes, or until beets are tender. Remove from oven and let stand for a few minutes before serving. Taste; add additional salt and pepper, if necessary.

Filed under Side Dishes