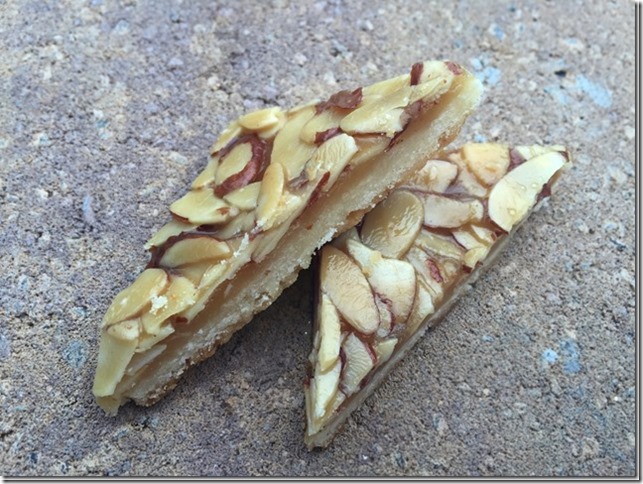 A shortbread crust, topped with a sliced almond caramel mixture and then baked to perfection.

END_OF_DOCUMENT_TOKEN_TO_BE_REPLACED 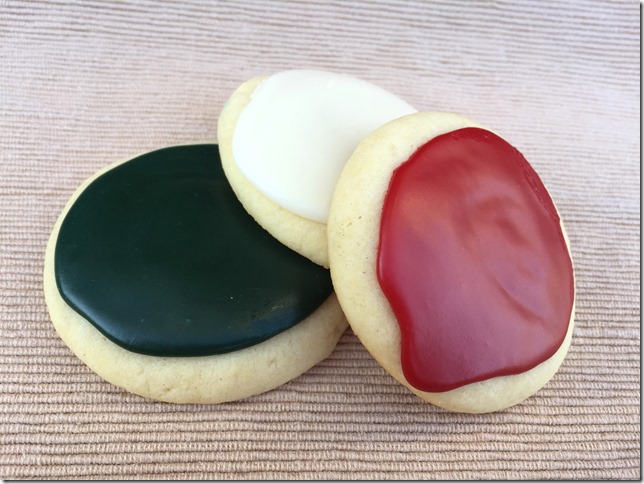 An uncomplicated cookie with a great almond flavor and a glaze that sets firm enough that you can stack the cookies. And no piping skills required.

Bake these until they are barely done to keep them soft. 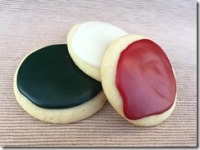 In a mixing bowl, beat butter and sugar until light and fluffy. Add egg and almond extract, beating until well mixed.

Roll dough into 1” balls and place on prepared baking sheets. Flatten slightly with the palm of your hand.

Bake for 8 minutes; do not overcook. Let cookies cool for 3-4 minutes on the baking sheets before transferring to a wire rack to cool. Cool completely before frosting with the glaze.

Place butter and cream in a microwave-safe bowl. Heat in the microwave for about 60-90 seconds, until butter melts. Stir in extract (if you want to use white icing, use a clear vanilla or other flavored extract). Use a whisk to mix in powdered sugar. Tint with desired gel food coloring.

Spread tops of cooled cookies with warm glaze and place on a sheet of waxed paper. If glaze gets too thick, heat in microwave for 15-20 seconds. Allow glaze to set on cookies for at least one hour before storing cookies. 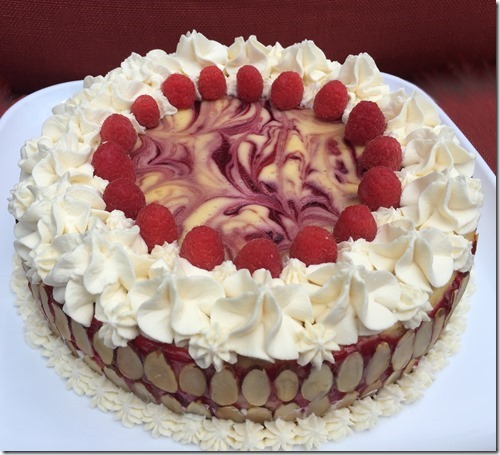 A delicious white chocolate cheesecake swirled with a sweetened raspberry puree is made even more decadent with a stabilized whipped cream and some toasted almonds. The crust is an Almond Coconut Crust that is easy to make gluten free.

Perfect for a summer dessert, or for raising money at a Boy Scout fundraising auction.

Cheesecakes should always be baked in a water bath. This helps them cook evenly, without becoming grainy. For a more in-depth look at cooking a cheesecake in a water bath, click HERE.

When the cheesecake has chilled for several hours (or overnight), remove it from the springform pan and prepare to transform the slightly boring cheesecake into something beautiful and mouth-watering. 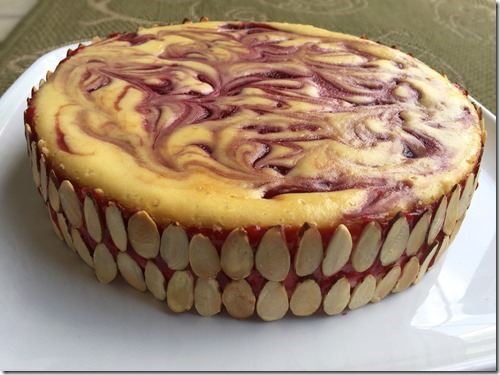 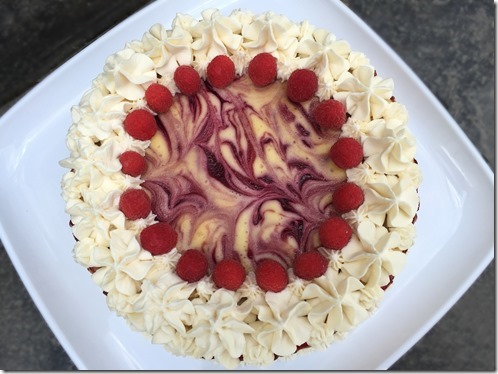 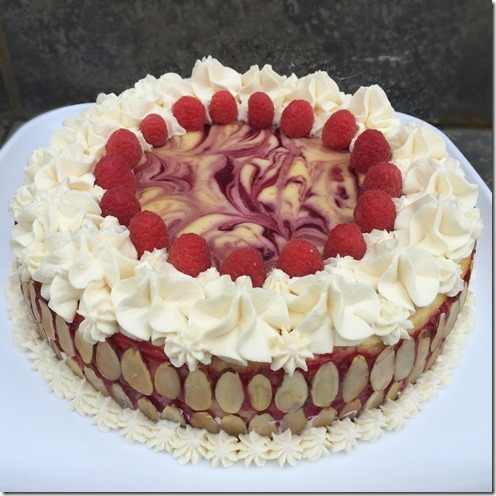 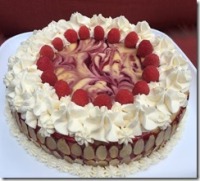 Place ½ cup heavy cream in a Pyrex measuring cup and heat for 1 minute in the microwave. Stir in white chocolate chips until smooth. Cool slightly while preparing rest of cheesecake batter.

In a large mixing bowl, use a mixer to combine cream cheese, sour cream, sugar, vanilla and almond extracts, and salt. Beat until smooth, scraping down sides of bowl as needed. Beat in cooled chocolate mixture. Add eggs to mixing bowl and beat until just combined.

Let cheesecake cool at room temperature for 1 hour. Cover cheesecake pan (do not remove sides) with plastic wrap, taking care not to touch the surface of the cheesecake. Chill for at least four hours or overnight.

Spread about ½ cup of the Raspberry Puree around the outside edge of the chilled cheesecake. Press toasted almond slices around the edge, covering the edge completely.

Line a 9″ springform pan with a parchment round. Spray lightly with baking spray. Spread the crust crumbs evenly onto just the bottom of the springform pan. Bake for 10 minutes. Cool completely before adding filling.

In a heavy saucepan, combine raspberries, ½ cup water, sugar, and lemon juice. Bring to a boil. Reduce heat and simmer for 5 minutes, crushing berries slightly with the back of a spoon. Strain the berries through a fine sieve, pushing the pulp through the sieve with the back of a spoon. Return seedless puree to the saucepan (rinse saucepan first if there are seeds clinging to the sides). Mix the cornstarch and ¼ cup cold water in a small bowl; stir into puree in the saucepan. Return mixture to a boil; lower heat and simmer for 1-2 minutes, or until slightly thickened and no longer cloudy. Cool before using. Store leftover puree in the refrigerator. 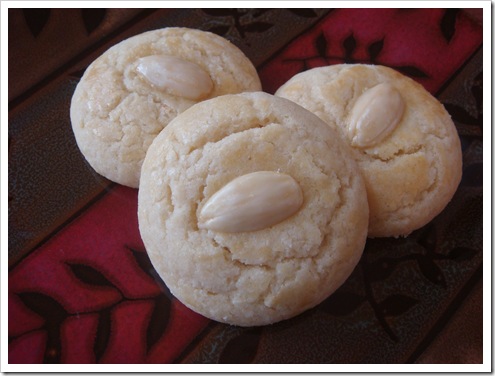 A soft, delicious cookie especially for the almond lover (that’s me!). The dough contains almond meal (ground almonds) and is flavored with almond extract. The cookies are then topped with blanched almonds before baking. A quick egg wash over the cookies gives them a great shine when they are cooked.

Can’t find blanched almonds at your store? Or don’t want to pay so much for such a tiny bag? Then blanch your own! All you need is raw almonds. The process is very easy: Boil them (1 minute), cool them (1 minute), squeeze off the skin. For a quick tutorial, click here: How To. . . Blanch Almonds 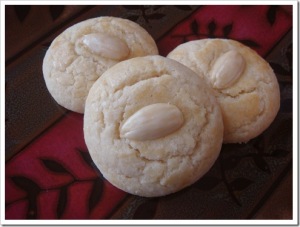 Mix together the flour, baking soda, salt, and ground almonds. Set aside. With a mixer, beat the butter and sugar together until fluffy. Add the egg, water, and almond extract and mix well. Beat in the dry ingredients until just combined. Roll dough in your hands to make 1-inch balls. Place 1-2 inches apart on a parchment-lined baking sheet (or use a silicon baking mat). Press a blanched almond into the top of each dough ball. Using a pastry brush, brush the top of each cookie with the egg wash. Bake for 14-15 minutes.

Bring a saucepan of water to a boil. Remove from heat. Add raw almonds to the hot water. Let sit for 1 minute (not longer). Drain and pour into a bowl of ice cold water. Let set in the water until cool (about 1 minute) Drain. Pinch almonds between your thumb and index finger to slide the almond out of its skin. Pat dry. Allow to dry completely before using in recipes.

If you oversoak your almonds and they don’t dry properly: preheat oven to 200°F. Turn oven OFF. Place almonds on a baking sheet and put into the warm (but OFF) oven. Leave almonds in the oven for 15-20 minutes.

Recipe adapted from Cooking for Engineers 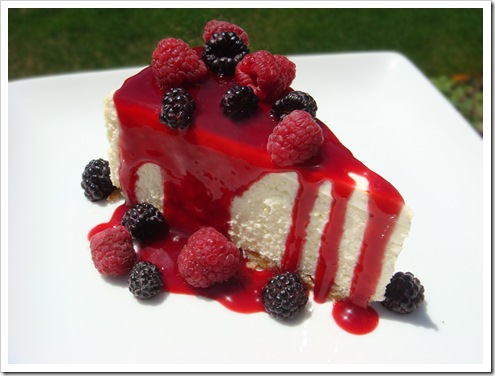 One of the treats that we made to go with our berry-picking haul was this raspberry topped cheesecake. A simple creamy vanilla cheesecake topped with fresh raspberries and a raspberry sauce. For me, dessert doesn’t get much better than this.

For a more in-depth look at cooking a cheesecake in a water bath, click HERE.

The leftover raspberry sauce (I made a double batch)  has been great on ice cream and homemade waffles. 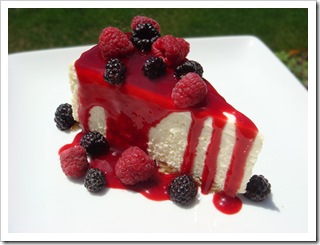 For filling:
In a large mixing bowl, combine all filling ingredients except the eggs; beat with a mixer until smooth. Add eggs and beat again, just until smooth (do not overbeat). Pour filling over crust.  Fill roasting pan (not springform pan!) with very hot (almost boiling) water to about 2-inches deep.

Bake cheesecake in the water bath for about 60 minutes at 350°F. The cheesecake will have puffed significantly, and the middle will still be slightly jiggly. Remove pan from water bath and run a sharp knife around the sides, but do not remove ring.

For topping (sour cream topping is optional):
While cheesecake is baking, combine sour cream, sugar, lemon juice and vanilla in a small bowl. Pour over hot (cooked) cheesecake and let stand at room temperature for 45 minutes. Cover cheesecake pan (do not remove sides) with plastic wrap, taking care not to touch the surface of the cheesecake. Chill for at least four hours or overnight.

To serve:
Remove plastic wrap and remove the outer edge of the spring form pan. If desired, slide a sharp knife under the crust and slide the cheesecake off the spring form base and onto a cake stand or serving platter. Serve cheesecake alone, or topped with fresh berries or Raspberry Sauce.

In a heavy saucepan, combine raspberries, 1/2 cup water, sugar and lemon juice. Bring to a boil. Reduce heat and simmer for 5 minutes, crushing berries slightly with the back of a spoon. For a seedless sauce: strain the berries through a fine sieve, pushing the pulp through the sieve with the back of a spoon. Return seedless puree to the saucepan (rinse saucepan first if there are seeds clinging to the sides). Mix the cornstarch and water in a small bowl; stir into puree in the saucepan. Return mixture to a boil; lower heat and simmer for 1-2 minutes, or until slightly thickened and no longer cloudy. Serve warm or cold. The sauce will thicken more as it cools.

To make a Raspberry Filling (for filling cakes/cupcakes/pastries): use 2-3 Tbs cornstarch and 1/4 cup cold water to thicken puree. Chill filling until cold before using. 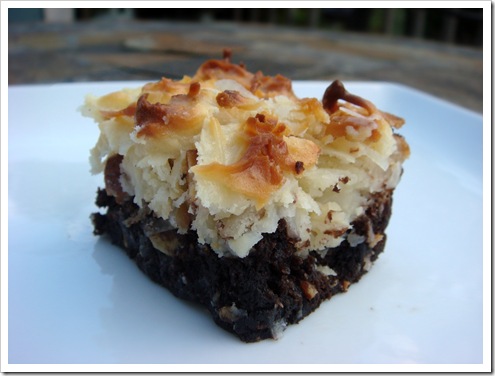 DAY 5: An easy way to dress up a boxed brownie mix!

Brownies topped with a coconut and almond cheesecake layer: thick, rich and delicious. As a real nut-lover, this recipe is one of my favorites. 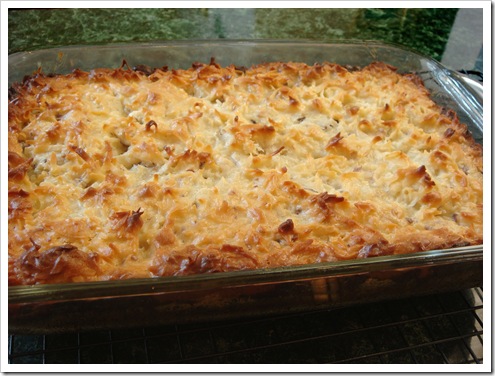 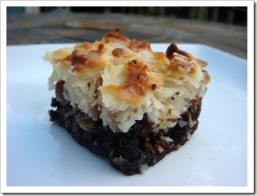 Prepare brownie mix according to box directions. Add half of almonds to brownie batter. Spread in two greased 8×8” pans (or one greased 9×13” pan: see NOTE below).

With a mixer, beat cream cheese, butter and sugar. Beat in 2 eggs, vanilla and almond extracts and flour. Stir in coconut and remaining almonds. Carefully spread over brownie layer. Bake at 350°F for 40-45 minutes (50-60 minutes for 9×13” pan) until center is completely cooked (cover with foil if top layer starts to get too brown). Cool completely before cutting.

NOTE: I usually bake this in 2 square baking pans because the center will set faster. You can use a 9×13” pan instead, but be sure the center is completely cooked before removing from oven.