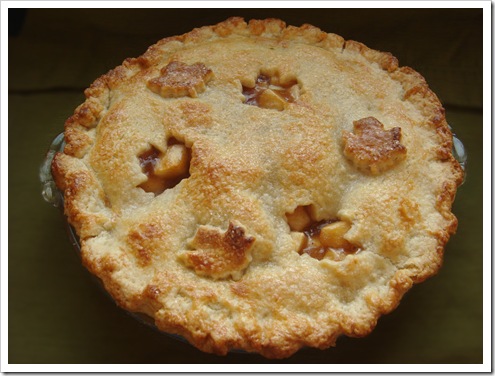 As part of a church young women’s project this fall, I have been teaching MiddleK how to can. We started with Applesauce, then promptly proceeded to eat almost all of it over that next week, which kind of defeated the “storage” role of canning. But it had been a long time since we’d had homemade applesauce around here, and I was glad to see the kids asking for that for a snack instead of chips or candy. So we bought A LOT more apples, and made LOTS more applesauce. With all of our apples we also made this Apple Pie Filling.

Middle K also wanted to learn to make her own piecrust for her pie filling, and while the family waited for her to finally make a pie, we ate the pie filling stirred into yogurt, as an ice cream topping, or when no one was looking: straight from the jar.

Yesterday, Middle K, under extreme pressure from her siblings, found the time to create this beautiful apple pie. She made the crust all on her own, and she did a fabulous job!

This canned apple pie filling is chock full of apples in a cinnamon brown sugar syrup. When choosing apples for pie, you want to choose a variety that does not get mushy when cooked, and is not overly tart, or you will need to add a lot more sugar to the syrup. We really like eating Granny Smith apples around here, but I don’t usually use them for pies, unless it is in combination with some sweeter varieties. I also like to use a combination of apple varieties, when possible. Then the different textures of the apples makes a nice balance in the pie. For this pie filling we used a combination of Golden Delicious and Fuji apples.

Good Apples for Canning:
Golden Delicious
Fuji
McIntosh
Jonagold
Rome
Jonathon
Cameo
Gala (but only in combination with another variety: they get kind of soft when cooked)

Not-So-Good Apples for Canning:
Red Delicious
Cortland
Gala (on their own)
Granny Smith (too tart on their own; texture is good, but they will require more sugar; good when combined with sweeter varieties)

When making the apple pie filling, you can thinly slice or dice the apples. I like to dice them because they fit better in the jars and are a nice size for biting in a pie. The chopped apples are mixed with apple cider, sugar and spices, and left to macerate for an hour or more before cooking. This helps release some of the juice from the apples and helps meld the flavors. We kept the spices simple in our batches this year: just cinnamon and a little bit of nutmeg. For a more heavily spiced pie filling, you can add cloves, ginger and/or allspice.

The one special ingredient that you need for making canned pie fillings is Clear Jel. Clear Jel is a modified corn starch made specifically for canning. It is a thickener that will not loose it’s texture or become grainy after being cooked more than once (first while preparing the filling and processing the jars and then again when you cook the pie). I buy mine from a company called Walton Feed. I like that I can get sealed cans. Clear Jel is also available in bags from Amazon.

One problem that we did run into on a couple of our jars was “siphoning”. This is when some liquid from inside the jars seeps out while processing, or immediately after being removed from the canner. The filling is still safe to eat as long as the lid seals, but it does make for kind of a sticky mess and an increased likelihood that the jars won’t seal properly. We left 1” headspace on the jars before processing, but next time I will leave 1 1/4”. After doing some reading, another way to reduce siphoning is to leave the jars in the boiling water bath (with the heat turned off and the lid removed) for about 10 minutes after fully processing them. I will try this next time around. Supposedly, the drastic temperature change from the boiling water to the outside air can often cause siphoning. Pie filling is the only thing I have ever had this problem with. Luckily, all of our jars sealed, but I did mark the ones that had the siphoning problem so that we could eat those jars first.

When making a pie from canned filling, you simply prepare your bottom crust, pour in the filling, add a top crust or streusel topping and bake (for about 45 minutes at 400°F). A regular 8”or 9” pie plate will use one quart jar. For deep dish pie plates (which I have), I use one quart jar and one pint jar. So I can both quart and pint sized jars. You could also just use 1 1/2 quart jars and use the other half jar as ice cream topping. 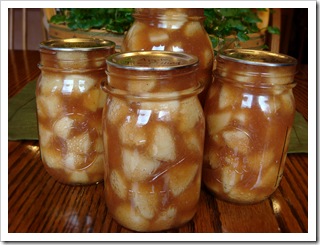 Peel, core and coarsely chop or slice apples. Place apples in cider mixture as you cut them. Allow apples to sit at room temperature for at least 1-3 hours, stirring occasionally.

Strain juice from apple slices into a large pot. Bring to a boil over medium-high heat. Reduce heat to low and simmer for 5 minutes.

In a small bowl, mix additional 1 cup of apple cider with the Clear Jel; stir into the cider mixture simmering in the pot. Return to a boil and cook until the juice has thickened, about 1 – 2 minutes. Stir in apple pieces with any remaining juice in the bowl. Return mixture to a boil, lower heat and simmer for 5 minutes.

Ladle hot pie filling into hot jars, leaving 1 ¼” headspace. Use a spatula or knife to remove air bubbles. Make sure that your apples are covered by the syrup. Wipe rims with a clean, damp cloth, place lid and ring on the jars, and process in a boiling water bath for 25 minutes for quart or pint jars. After processing, turn off heat and remove the lid from the canner, but allow the jars to sit in the water for 10 minutes before removing. This will help reduce siphoning (liquid seeping out of the jars). Remove jars from water and place on a clean, dry towel on the kitchen counter. Let sit for 24 hours. Check seal, remove rings and store.

Canned pie filling can be used to make apple pies, tarts, or apple crisp. Or spoon it onto ice cream or yogurt.

To make a regular 8-9” pie: use one quart of pie filling

To make a deep dish 9” pie: use one quart + 1 pint of pie filling (I can both quart and pint jars to make this easy. Or just use 1 1/2 quart jars and eat the other half quart as ice cream topping)

BAKING: Bake pies at 400°F for 30 minutes. Check browning on top crust. Add a Pie Crust Shield (you can make your own!) or foil to edges as they begin to brown. Cook for an additional 15-20 minutes, or until filling is bubbly and crust is cooked (check often to prevent over-browning of top crust)

I like to use this All Butter Pie Crust.