Apple Butter (or Applesauce if you quit halfway through)

One more apple recipe (actually two, because you can make either applesauce or apple butter with this recipe.

There are two ways to make apple butter (many more than two actually, but two main ways): with a food mill or without a food mill. I highly recommend using a food mill. It saves tons of time on the initial prep work, and is easier on the finishing end as well. 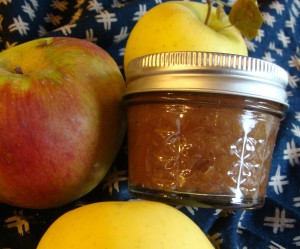 What to do if you don’t own a food mill? Borrow one from a friend (Many thanks, Sherry!). Still don’t have a food mill? You can still make this recipe, just get out your apple peeler and start peeling (and have a food processor or blender handy).

If you are using a food mill you can skip the whole apple peeling and coring process. Just cut your apples into about 8 chunks/slices and place in a roasting pan. The peels and core are full of pectin and will help the apple butter set (but it will still set if you are using peeled apples). The recipe I like is adapted from the cookbook Cooking with Shelburne Farms.

Roast the cut apples with cinnamon sticks and pure maple syrup for a fabulous flavor. Grade B maple syrup is actually recommended in the cookbook because it has a stronger maple flavor, but I only had Grade A, so that is what I used.

When the apples are soft they are ready to go through the food mill (remove cinnamon sticks) or food processor. A food mill will automatically separate the good part of the apples from the skin/seeds/core.

You have just made applesauce. Go ahead, taste it! You can stop now, or keep cooking to make apple butter. 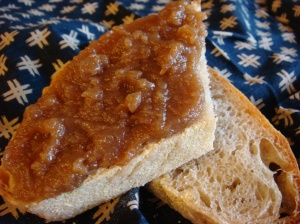 Return the applesauce to the roasting pan (with more maple syrup and ground spices) and cook for 60 – 90 minutes, stirring often, until apple butter is thick and caramel colored. It is done when a spatula drawn through the mixture leaves a clean trail.

The apple butter can be processed in jars in a boiling bath canner, frozen in plastic containers, or stored in the refrigerator.

Cut apples into wedges and place in a large roasting pan (if you do not have a food mill, peel and core apples as well). Place cinnamon sticks on the apples and drizzle with the apple cider and ½ cup maple syrup (use more for really tart apples).

Use a food mill to puree the apples (it will remove the skins and seeds). If you do not have a food mill, place peeled, cooked apples in a food processor and blend until well mixed. Stir in additional ½ cup maple syrup, ground cinnamon, cloves and allspice, and any liquid left in the roasting pan.

Return apple mixture to roasting pan, spreading mixture evenly (to avoid burned places). Cook for 60 – 90 mins, stirring every 15 – 20 minutes. Apple butter is done when a spatula can be drawn through it and leave a clean path. Taste and add additional spices and syrup, if desired.

Process in a boiling bath canner for 10 minutes (for half-pint jars), if desired.

FOR APPLE SAUCE:
Roast apples as above (with maple syrup and cinnamon sticks) and process through food mill. That’s it. You’re done. You can add additional ground cinnamon, if desired.

To can applesauce in quart jars: process in a boiling water bath for 20 minutes.