This cheesecake starts with an easy-to-make lemon gingersnap crust, followed by layers of pumpkin and vanilla cheesecake. After baking, the entire cheesecake is garnished with pecans and drizzled with a butterscotch topping. This is a great make-ahead dessert perfect for Thanksgiving, or any other holiday.

The Lemon Gingersnap Crust is made from these cookies:

For detailed information about baking a cheesecake in a water bath, see this post: Creamy Citrus Cheesecake

Once the cheesecake has baked and chilled for at least 4 hours, preferably overnight, the pecan garnish and butterscotch topping can be added. 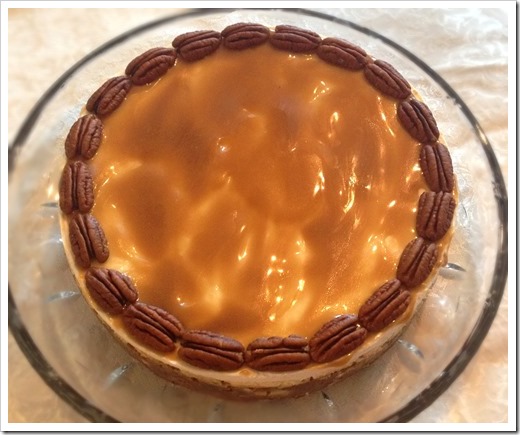 Using a squeeze bottle or pastry bag with a thin round tip, drizzle butterscotch sauce over the entire top of the cheesecake and pecans, allowing some to drip down the sides. You can do a simple drizzle, or a lattice pattern by drizzling in straight lines along cheesecake, then turning 90 degrees and drizzling again (perpendicular to first layer). 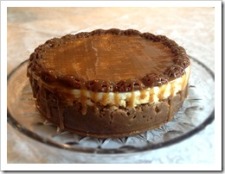 Process cookies and pecans in a food processor until finely ground. Add melted butter and mix. Press into the bottom and halfway up the sides of a 9” springform pan. Refrigerate for about 20 minutes while preparing filling.

Mix all ingredients with an electric mixer until smooth. (You can also substitute 1 1/2 tsp pumpkin pie spice for the other spices)

Mix all ingredients with an electric mixer until smooth.

Bake cheesecake in the water bath for about 80 minutes. (Cover top of cheesecake with foil if it begins to brown before it is set.) When it is cooked, the cheesecake will have puffed significantly, and the middle will still be slightly jiggly, but not soupy. Remove pan from water bath and run a sharp knife around the sides, but do not remove ring. Place on a cooling rack and let cheesecake stand at room temperature for one hour. Cover cheesecake pan (do not remove sides) with plastic wrap, taking care not to touch the surface of the cheesecake. Chill for at least four hours or overnight.

Combine butter, brown sugar, cream, corn syrup, lemon juice and salt in a medium saucepan. Stir and cook over medium-low heat until mixture boils. Simmer for 5 additional minutes, or until slightly thickened. Stir in vanilla and cook for 2 more minutes. Cool before drizzling over cheesecake. Store in refrigerator. (This makes more than you will need for topping the cheesecake)

Remove sides of springform pan from chilled cheesecake. Remove bottom of pan and place cheesecake on a serving platter.